Podcasts I Don't Love From People I Don't Trust

I've been a fan of TWiT since Leo Laporte got the idea to start a podcast sometime after the demise of TechTV. Seven years later, it has grown into a podcast network of 20+ shows with a huge studio in downtown Petaluma, CA.

Unfortunately, Leo has done some things recently that, quite honestly, are not the kinds of things I wish to support. As a result, I've decided to stop listening to any TWiT-produced podcasts.

What are my reasons? Glad you asked.

This is somewhat old news. I expressed my thoughts on this last year and they haven't changed, at least with respect to his personal relationship with his now-estranged wife, which he has claimed numerous times on-air is still good.

What does bother me is the fact that, right around the time this event broke, a particularly talented post-production editor and up-and-coming talent on his network was suddenly persona-non-grata at TWiT. Erik Lanigan was editing the video that ultimately exposed his "affair," which was picked by Gawker.

When asked about Erik's firing on his recent Reddit AmA

It doesn't take a genius to figure out why Erik Lanigan was fired.

Adam Curry and the Man Who Was (Not) On The Moon

Last week, Adam Curry was a guest on TWiT and the topic of Neil Armstrong's death was discussed. Leo had asked Adam if he believed that he walked on the moon, to which he replied very honestly, "no." A very respectful discussion occurred about this on the show. That, along with the later discussion about the display advertising model, makes it one of the best TWiTs I've heard in a long time.

Meanwhile, Leo's fans were not happy about this and took to blasting him on Twitter. That didn't bother me. What did bother me was Leo's response, like this one: 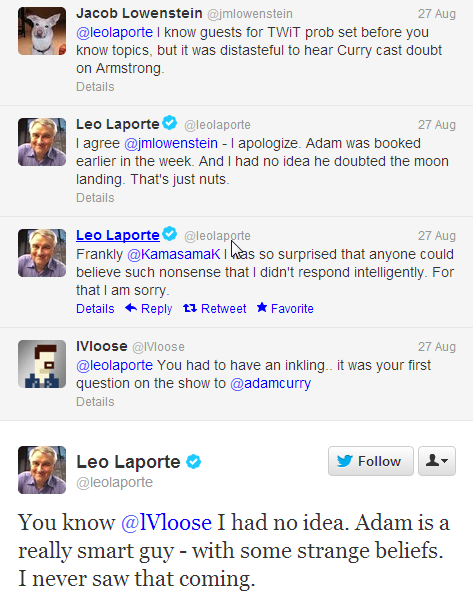 First off, Adam Curry disputes that "Adam was booked earlier in the week" in his version of the events that he described in Daily Source Code 866--he was actually booked the day before the episode (which was after Neil Armstrong passed away). Second, he's had Adam on before, knows all about No Agenda and that his views on a great many things are, well, different. Or even "crackpot." 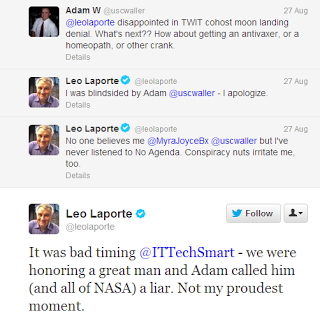 And finally, on his This Week in TWiT show, he continues to throw Adam under the bus, even mentioning banning Adam from the show!

Leo's free to have whoever he wants on his network. It's his to do that with. However, to say he had no idea that things could go this way was at best disingenuous, at worst an outright lie.

I've also had my own interactions with the TWiT army via their IRC channel, which is moderated by some of the strictest moderators known to man. Anything even remotely challenging to either the hosts worldview, the moderators, controversial points of view, or anything that could be construed as sexual will result in being kicked from the chatroom immediately.

Based on the comments Leo continues to receive on Twitter related to Adam Curry's views, I can only conclude the majority of the TWiT army is perfectly happy to not question authority or to even entertain differing points of view.

Sorry, folks, that's not me.

I realize that me not listening to Leo Laporte and the TWiT network is probably not going to be noticed by anyone but me. I also don't think I'm necessarily going to sway anyone to come to the same conclusion I did. That said, I am building a handy page explaining alternatives to TWiT podcasts to help anyone who is.

Update 16 Oct 2012: Leo's sexts get caught on the air again. Honestly I don't care that he gets sexts--good for him--but as many times as he has inadvertently "exposed" himself on-air, you'd think the self-proclaimed "Tech Guy" would take a few more precautions.